YAY!! about time I say! Who has spent hours typing up a status posts, hit submit and then realised there is a typo because your iPhone or iPad has auto-corrected it to something far from what you wanted. Then you would have to either delete the post, re-post it or wait till you could get to a desktop and edit the mistake?

Well now the Facebook gods have finally launched this fix available now in the new version of their ios app. 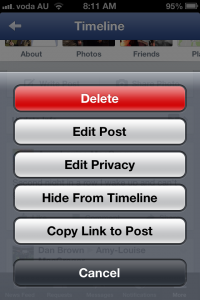 Plus another bonus they have snuck in is the editing features, the app will also allow users to add a photo in with their comment. Photo commenting has been a popular feature that was released earlier this year, and making this available to mobile users should only help increase the take-up of this reply with photo option.

Here’s a full list of all changes in the app update:

• Edit your posts and comments, and tap to see all your changes (iPhone only) • Add a photo when you comment • Express yourself with icons when you post to someone’s timeline (English only) • Get to privacy shortcuts by tapping the lock by your name in the main menu • Bug fixes