Google+ As We Know It Is Dead

As a Social Media badass I always was torn on whether to use it in a capacity that I would be required to invest a lot of time into it. I primarily use Facebook for lead generation and you know what, I was genuinely excited to hear about Google+ when it launched, but I was shortly to be disappointed.

Google+ started out as their own interpretation of consolidation. They wanted to combine the way we used their Photos and Communications products.

Like most new social platforms all the hardcore bloggers jumped across and gave it a whirl only to find out that it wasn’t as intuitive as they were used to with FB & Twitter. It was clunky, slightly outdated in its design and seemed to be hamstrung with its connection to each other.

Now the folks at Google have confirmed rumours that they will be killing off certain aspects of Google+ and splitting the Photos and Communication streams up. 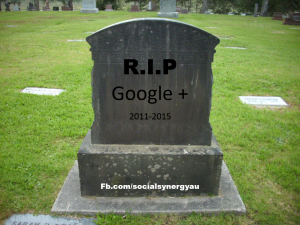 Gone are the days of trying to leverage your Google+ profile and your authorship for better search engine results and seo tactics.

I am almost thinking..

Why should we invest much time in building profiles, connections, and communities if we’ll soon have do it all again when they come up with another product for us?

Don’t get me wrong, I am a massive Google fan. I make sure I am on the invite list to all their latest releases, Gmail, Google+ Their New Inbox etc.

Maybe this split will breathe new life and bring some much needed inspiration to their product development team?

Meanwhile I wouldn’t suggest that you completely abandon them, until we know entirely what they are up to.

It is Google after all.